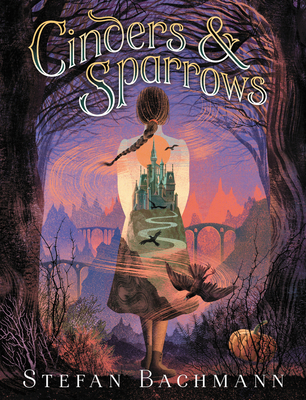 “Witches, ghosts, and beastly creatures, oh my! A spine-tingling adventure ensues when a 12-year-old orphan housemaid is found to be the lost heir of a family dynasty of witches. Add in the creepy Blackbird Castle, a pinch of evil villains, and a dash of spells, mix well, and enjoy a suspenseful mystery of good vs. evil.”
— Katrina Padilla-Sornoso, San Marino Toy & Book Shoppe, San Marino, CA

This is a great book for kids who love witches, magic, and the pathway to destiny. This is a must read and will sweep readers into the enchanted world of magic and witches! I loved it! Ages 9-12

“Readers won’t be able to turn the pages fast enough.”—Soman Chainani, New York Times–bestselling author of The School for Good and Evil series

A suspenseful tale of witches, family, and magic from internationally bestselling author Stefan Bachmann. When a twelve-year-old orphan unexpectedly becomes the mistress of a seemingly abandoned castle, she is thrust into a mysterious plot involving murderous spells, false identity, and a magical battle of wills between the living and the dead. Readers of Kate Milford’s Greenglass House, Victoria Schwab’s City of Ghosts, and Diana Wynne Jones will be riveted.

Twelve-year-old Zita, an orphan and a housemaid, has resigned herself to a life of drudgery. But one day a strange letter arrives, naming her the only living heir to the Brydgeborn fortune. Now the mistress of the castle, Zita soon realizes foul play led to the death of her family. And as she is guided through lessons in the art of witchcraft by the somewhat mysterious Mrs. Cantanker, Zita begins to wonder who is friend and who is foe.

Unforgettable and utterly enchanting, this stand-alone tale about family, belonging, and friendship will bewitch readers of Tahereh Mafi’s Whichwood, Katherine Arden’s Small Spaces, and Diana Wynne Jones’s Howl’s Moving Castle. Cinders & Sparrows is a magical page-turner by the author of the acclaimed international bestseller The Peculiar.

Stefan Bachmann was born in Colorado and spent most of his childhood in Switzerland, where he graduated from Zurich University of the Arts with degrees in music composition and theory. He is the author of The Peculiar, his debut, which was published to international acclaim when he was nineteen years old. His other books include The Whatnot and A Drop of Night. www.stefanbachmann.com

“Stefan Bachmann is a terrific, ambitious writer . . . Magic and mystery tied up with real stakes—readers won’t be able to turn the pages fast enough.” — Soman Chainani, New York Times-bestselling author of The School for Good and Evil series

“Although a 12-year-old servant girl doesn’t recall the time before she was an orphan, she remembers her secret, powerful name: Zita Brydgeborn.. . . The last of a family of powerful witches . . . there is much to learn and no one she can fully rely upon . . . Bachmann’s worldbuilding is delightful . . . rich with enough ghosts and enchanted staircases to satisfy any fantasy lover, and the cast of characters . . . is well developed and engaging, especially intrepid narrator Zita. A suspenseful and entertaining romp through an entertainingly witchy world.” — Kirkus Reviews (starred review)

“In a house so full of secrets . . . nothing is what it seems. Through enticing details, Bachmann creates a singular, gothic world in which a long-declining class of psychopompic witches defend against the restless dead. . . . Dreadful creatures, an absorbing atmosphere of escalating tension and paranoia, and moments of delightful magic all make for a memorable adventure.” — Publishers Weekly

“An orphan has no idea of her birthright until a mysterious stranger shows up to inform her of her destiny. Suddenly, Zita is heiress to a castle, learning to develop her innate skills as a witch and exposed to a whole world beyond the orphanage where she was raised. . . . Bachmann balances horror, magic, and a coming of age story with aplomb.”  — Bulletin of the Center for Children’s Books

“Orphan housemaid Zita Brydgeborn quits her position and travels to Blackbird Castle after receiving a letter informing her she’s the long-lost heir. But on arrival she discovers that she’s also expected to assume the duties of the great witching Brydgeborn family . . . As Zita puzzles through the twin mysteries of what happened to her family and how she was separated from them in the first place, she faces dangers from beyond the grave. Bachmann incorporates magic and atmosphere in this appealing tale.” — Horn Book Magazine