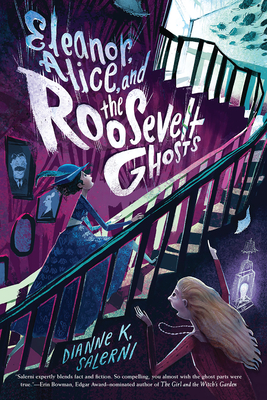 Email or call for price

This is a great book for readers who love ghosts and history! Chapters 19-21 just gave me chills. I had to keep reading! - Guest Reader Persephone, age 10

— From Kids and Teen Books
Murderous ghosts and buried family secrets threaten young Eleanor and Alice Roosevelt in this thrilling middle-grade novel that puts a supernatural spin on alternate history.

It's 1898 in New York City and ghosts exist among humans.

When an unusual spirit takes up residence at the Roosevelt house, thirteen-year-old Eleanor and fourteen-year-old Alice are suspicious. The cousins don't get along, but they know something is not right. This ghost is more than a pesky nuisance. The authorities claim he's safe to be around, even as his mischievous behavior grows stranger and more menacing. It's almost like he wants to scare the Roosevelts out of their home - and no one seems to care!

Meanwhile, Eleanor and Alice discover a dangerous ghost in the house where Alice was born and her mother died. Is someone else haunting the family?

Introverted Eleanor and unruly Alice develop an unlikely friendship as they explore the family's dark, complicated history. It's up to them to destroy both ghosts and come to terms with their family's losses.

Told from alternating perspectives, thrills and chills abound in Dianne K. Salerni's imaginative novel about a legendary family and the ghosts that haunt their secrets.

A Junior Library Guild Gold Standard Selection
Dianne K. Salerni has written many books for children and young adults, including state-award nominated series The Eighth Day and Junior Library Guild Selection The Caged Graves. She attended the University of Delaware and the University of Pennsylvania before teaching fourth and fifth grades for many years. Now Dianne spends her time hanging around creepy cemeteries, climbing 2,000-year-old pyramids for book research, and volunteering at her local rescue animal shelter. She lives in Pennsylvania with her family. Visit her at www.diannesalerni.com.
"The concept for this story is totally bizarre—but this book is a delight! Alice and Eleanor are sympathetic and charming characters, and Salerni develops their personalities, fashion, and physical attributes so they are easily recognizable to readers of history. . . . An immensely fun read."—Historical Novel Society

"Salerni skillfully incorporates facts about the extended Roosevelt family . . . into a lively and inventive ghost story/mystery/historical fiction mashup. . . . Although the novel is engrossing right from the start, tensions build very quicky to a thrilling, Ghostbusters-esque climax"—The Horn Book

"A spooky, fast-paced, and inventive tale. Salerni expertly blends fact and fiction, providing a glimpse of Eleanor and Alice Roosevelt's childhood that is so compelling, you almost wish the ghost parts were true."—Erin Bowman, Edgar Award–nominated author of Contagion and The Girl and the Witch's Garden

"Salerni places [Eleanor and Alice Roosevelt's] true story of loss and friendship in a fictional world plagued by ghostly eruptions of supernatural energy, and their strength in the face of adversity is made all the more memorable and noteworthy. The young women, teenagers in the tale, must investigate an unexpected haunting that brings to light a hidden and complicated family history. Their alternating perspectives provide fascinatingly different depictions of their resilience in the face of tribulations. This book is highly recommended for fans of historical fiction and thrilling mysteries."— Booklist