Has Anyone Seen My Toes? (Hardcover) 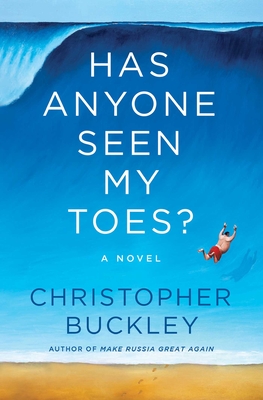 Has Anyone Seen My Toes? (Hardcover)

During the pandemic we find an aging screen writer holed up at during Covid, and his world is spinning quickly out of control. Could be his unhealthy eating, the diet pills he was prescribed, or the silly new screenplay he's working on. His loving wife Peaches is worried! Totally loved this book, funny.

— From ABA Example Only for Flatland Booklist 2 NEW
From the bestselling author of Thank You for Smoking and Make Russia Great Again comes a comic tour de force, the story of one man’s spiraling journey through lockdown during the Covid-19 pandemic.

During the pandemic, an aging screenwriter is holed up in a coastal South Carolina town with his beloved second wife, Peaches. He’s been binge-eating for a year and developed a notable rapport with the local fast-food chain Hippo King. He struggles to work—on a ludicrous screenplay about a Nazi attempt to kidnap FDR and, naturally, an article for Etymology Today on English words of Carthaginian origin. He’s told Peaches so often about the origins of the world mayonnaise that she’s developed an aversion to using the condiment. He thinks he has Covid. His wife thinks he is losing his mind. In short, your typical pandemic worries. Things were going from bad to worse even before his doctor suggested a battery of brain tests. He knows what that means: dementia!

But even in these scary times, there are plenty of things to distract him. His iPhone is fat-shaming him. He’s been trying to read Proust and thinks the French novelist missed his true calling as a parfumier. And he’s discovered nefarious Russian influence on the local coroner’s race. Why is Putin so keen to control who decides who died peacefully and who by foul play in Pimento County? Could it be the local military base?

Has Anyone Seen My Toes? is a hilarious romp through a time that has been anything but funny.
Christopher Buckley is a novelist, essayist, humorist, critic, magazine editor, and memoirist. His books include Thank You for Smoking, The Judge Hunter, Make Russia Great Again, and The Relic Master. He worked as a merchant seaman and White House speechwriter. He was awarded the Thurber Prize for American Humor and the Washington Irving Medal for Literary Excellence.
“Christopher Buckley isn’t simply a marvelous humorist but also a corrosive observer of the American republic. Fresh from his novel Make Russia Great Again, Buckley scores once more with Has Anyone Seen My Toes? a hilarious account of the travails of an aging screenwriter who is hunkered down in a coastal South Carolina town during the Covid pandemic with his second wife Peaches and stepson Themistocles.”

"This is Buckley at his comic, mischievous best...Buckley delights in exploring the intersections of plausible and absurd as they arise in an off-kilter mind that resembles the author’s for all its allusive gymnastics and silliness."
—Kirkus Reviews, starred review

"This is one of Buckley’s funniest books—there's a big laugh on nearly every page, often more than one—and, perhaps unexpectedly, it's also one of his most compassionate. A delight, with bite."
—Booklist, starred review

“A laugh-out-loud take on the writerly life.”
—Publishers Weekly

"The writing is lively and funny, as Buckley finds the ridiculous in much of the ordinary aspects of life, during a pandemic or not....He has found all the bubbles that need bursting in our current preoccupations. If you’re ready to laugh at pandemic absurdities, this is the book for you."
—New York Journal of Books

“Has Anyone Seen My Toes? is mirth when we need it the most from one of our great satirists....The pandemic has muddled our minds and Buckley captures these moments of inanity with comedic brilliance."
—Free Lance-Star

"Has Anyone Seen My Toes? is Buckley at his madcap best, deserving of a place on your bookshelf right next to P. G. Wodehouse."
—Air Mail

“In Has Anyone Seen My Toes?, Buckley has captured the zeitgeist of the pandemic in his own hysterical way. In so doing, he gives readers the chance to cleanse themselves of COVID cobwebs and another excuse to laugh….Buckley's sure hand keeps the reader entertained along the way….many turns of a phrase, clever and wonderfully sarcastic wording and plenty out-and-out funny lines.”
—Newsweek

"The silly pandemic story you didn’t know you needed....Buckley is a pro...even as he offers us a dark glimpse into the gaping maw of pandemic living, he plucks us back from the edge and drops a fresh orange peel into our Negroni."
—Washington Independent Review of Books

"Is it too soon to joke about COVID-19? In his new novel, Christopher Buckley tests that proposition, and his answer is a darkly funny, if decisive, no.....This romp is simultaneously thought-provoking and (for those of us enmeshed in current events) refreshingly escapist."
—Washington Free Beacon

"A hilarious novel about life during the pandemic when one’s health is the least of one’s worries."
—The Bookworm